Kelly and Michael’s November wedding was full of romance, heart eyes, and true love! From the colors of navy, wine, and gold to the stunning Radisson Hotel venue in Normal, IL, there was no better way for these newlyweds to say “I do.” It was amazing to capture the emotions, intimate glances, and stolen glances that radiated throughout the ceremony and reception.

The story of how these lovebirds met is Kelly and Michael’s absolute favorite. One day in 2014, Kelly’s best friend Meg texted Kelly to let her know that she had found the perfect guy for her. Kelly basically said, “Thanks, but no thanks,” because setups are awkward and she was living in Florida at the time. In the meantime, Mike moved to Chicago and moved in with his best friend, who just happened to be dating Meg. Yes, the stars were beginning to align for these destined sweethearts! That summer, Kelly came to visit, and after Meg picked her up from the train station, she dropped a quiet bomb telling her not to mind Mike’s stuff when they got to the apartment. Although confused at first, it suddenly dawned on Kelly just who her friend was talking about. Meg is so sly – and she knew what she was doing!

Props to Meg for getting the ball rolling for this romantic love story! When Kelly first met Mike, he flashed his huge smile, and she was instantly intrigued. The group went out to a party, and Kelly remembers that anytime she tried to talk to Mike, he seemed disinterested. The nerve! Eventually, they began a Wiffle Ball tournament at a park, and guess who won all the games? Kelly, of course! Afterwards, she and Mike shook hands. At the same moment, Kelly saw a family trying to take a photo of her kids, and she walked over to offer to take a photo for them. Mike later shared with Kelly that that was the moment he knew he was going to love her forever. Cue the tears!

A Wiffle Ball Game that Changed Their Lives

For both of them, it was a simple game of Wiffle Ball that started it all. From that day, they have not stopped talking. They often say they wish they could re-live that day, or at least watch it. How cute is that? Mike even re-enacted that first day and the stops along the way when he proposed. Yes, Kelly was on cloud 9 and she melted for her man! Gosh I just can’t get enough of love stories like this!

As a couple, they love games. Are you surprised? Kelly always carries a deck of cards and dice in her purse, just in case. They enjoy hosting game nights with their friends, or just playing a game together. Both don’t like to lose! These lovebirds are also active – whether acting out their favorite dance scenes from musicals, playing sports, or walking their dog. Cookie dough usually never gets baked in their house. They love their frozen pizza and mac and cheese nights. Don’t challenge them to movie trivia because you are likely to get your butt kicked! Seriously, though, Kelly and Mike are best friends, and it is obvious in every interaction they have.

Although their wedding took place in November, the day was alive and warm with their loving personalities! Their day was full of unique and personal touches. Kelly acted as the calligraphist for the day, and she handmade all the décor. Every detail was carefully put together to create a seamless romantic look. Another incredible element that was included was Kelly’s pieced-together wedding dress. She had a specific look in mind, and by putting together the top of a bridesmaid dress with a different skirt, her dream dress came alive. The ladies at Adore Bridal in Morton, IL were able to make the perfect dress, and Kelly was so excited for her dad, Michael, and her bridal party to see it.

Kelly and Michael’s November wedding was also full of wonderful surprises and traditions. Kelly wrapped her bouquet with a piece of her mother’s lace, and she found a handkerchief of her late grandfather’s to wipe away all of her happy tears. Michael’s wedding band was specially made; it was a combination of his late grandfather’s wedding band and his other grandfather’s heirloom ring. Kelly surprised Michael with cufflinks with her writing and their wedding date on them, and she also engraved his wedding ring. How cute! It’s details like these that truly make a wedding day special and unique.

Here’s to a long life of friendly competition, game nights, and laughter for Kelly and Mike! 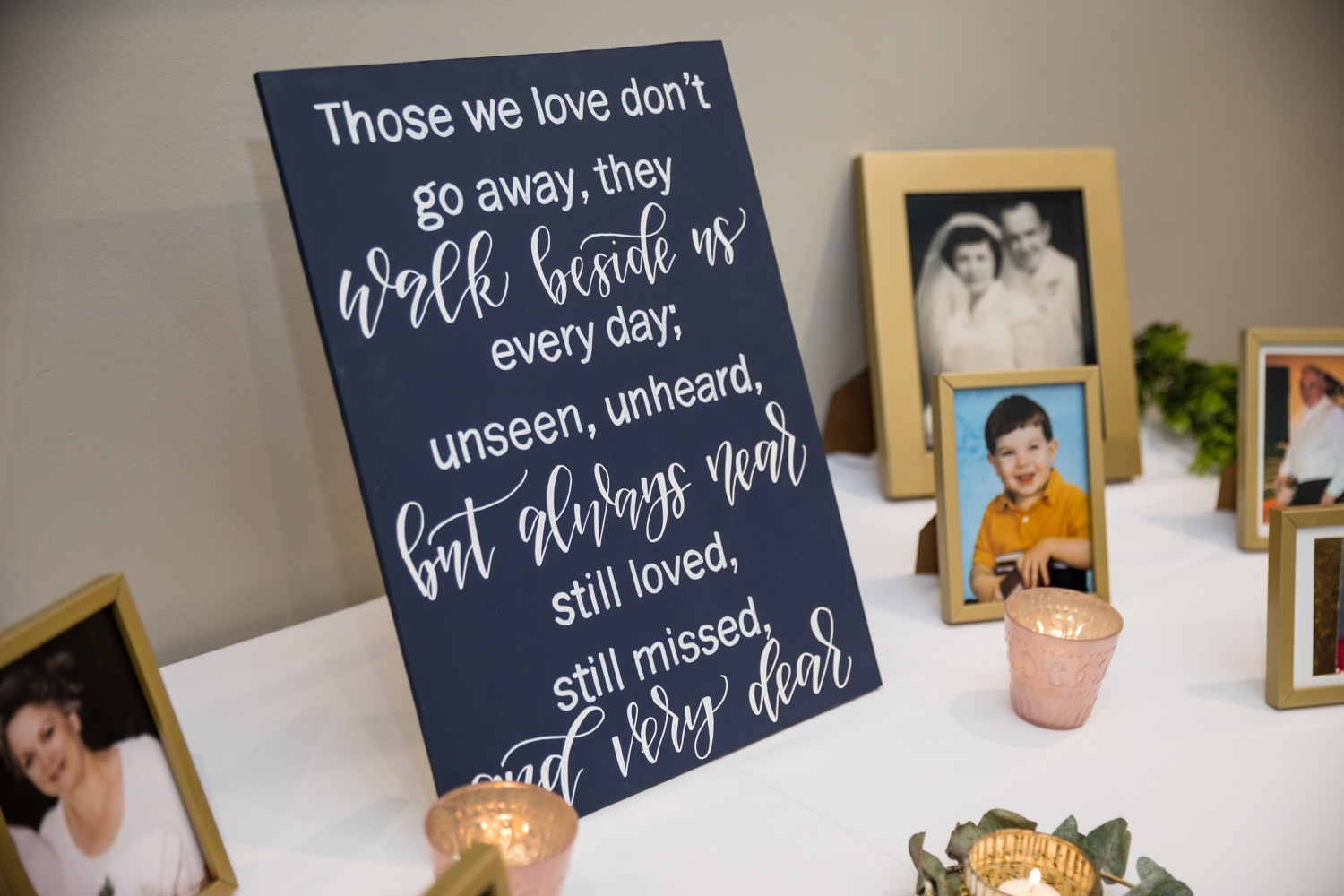 If you loved this wedding in Normal, IL you will also adore Katie and Ryan’s engagement session in Normal!